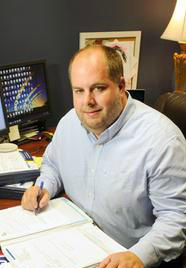 My path to a Real Estate in the Sacramento area has been anything but direct. Like most people, I have had my
fair share of ups and downs along the way. I was born and raised in Upstate New York. When I was young, my
family spent a lot of time in the Albany area, but we also moved around the state quite a bit. Other than that,
my childhood and early teenage years were pretty ordinary.

In 1985 we found out that my Mom had Cancer, and in 1994 my Dad was also diagnosed with the disease, so the
normality of my formative years quickly vanished. While my Mom bravely fought it into remission, my Dad’s
valiant effort was unsuccessful, and he passed away in my early twenties. This was obviously a very difficult time
for me, but it was also inspiring to see two people who I love fight with so much dignity.

After high school, I took some courses at Embry Riddle Aeronautical University in the Aeronautical Engineering
Physics program with the hopes of one day becoming a rocket scientist, but quickly realized it wasn’t for me, so I
moved back in with my parents and started working in the kitchen at a local restaurant. At first moving home
seemed like a step back in life, but I ended up finding my first career and my first love; cooking.

I was so enthralled with my new occupation that I enrolled in the Culinary Institute of America - Hyde Park in
New York City, one of the top institutions in the country, to learn and perfect my craft. I graduated and earned
my first Chef’s Residency at The Russian Tea Room, a famous establishment in Midtown Manhattan, next to
Carnegie Hall.

While I was attending the Culinary Institute, my parents moved to the Sacramento area because my Dad was
transferred for work. When my father was diagnosed, I followed them to Northern California to help out and
spend time with him before he passed.

When I got to Sacramento, Chef jobs were scarce, so I switched gears and focused on the business side of the
house, instead of the kitchen. I spent several years in front end manager roles for several establishments. Then I
moved up to a corporate position, where I managed a group of restaurants.

My experience in management, front end, and kitchen environments eventually led me to start my own
restaurant consulting business. I assisted future and current restaurateurs with every phase of the process, from
concept, to design, to menu, to accounting, and everything in between. It was during that time that I got my first
taste of real estate while working with commercial agents to sign leases for new restaurant locations. During this
time, I started learning the ins and outs regarding the documentation and legal requirements of property
transactions.

During my first years in Sacramento, I also met a charming hostess named Janay, and we started dating shortly
after we were introduced. In 2002, we got married and decided to purchase our first home. While this should
have been a highlight of our lives, dealing with our realtors turned it into an extremely negative and stressful
experience. Because of this situation, I decided that I could do a better job, and decided to pursue a career in
real estate.

I obtained my Real Estate License in 2005, and shortly after I started in the field, the housing crash of the late
2000’s devastated the industry. New and experienced agents fled in droves, but I stayed the course and
weathered the storm. As a new agent, persevering through that time was extremely difficult, but it made me

better at what I do. Dealing with the added uncertainty, increased bureaucracy, and heightened stressfulness
taught me to develop the diligent, focused, and thorough approach that I still apply in the field to this day, long
after the recession has ceded.

The challenges of the 2007 economic downturn, in addition to my other life experiences, imparted in me some
very tangible characteristics that have contributed to my successes as a realtor. The challenges facing my
parents’ illnesses, shifting through different roles in the restaurant industry, building my own consulting
business, and enduring the economic downturn, taught me volumes about resilience, professionalism, and
service, and these are still the fundamental principles I use to guide my business today.

I would love nothing more than to lend the knowledge and experience that I have learned along the way toward
helping you with your real estate endeavors, but I don’t expect your business simply because of our
relationship—I only ask that you take the time to interview me and see if I might be the best agent for you.
Thank you for taking the time to learn about me. When you or someone you know is in need of a real estate
agent, I hope you give me the opportunity to demonstrate my services and interview for the job.

Thank you for your recommendation!

Your feedback is very much appreciated.